That's right folks. I've resorted to using the most simplistic and obvious titles I can in an effort to JUST BLOG ALREADY! Thank you to those of you who still check here to see if perhaps I've done something new lately, which I haven't. Sorry.

So here we have the unveiling of the costumes. I'm not sure I can compete with last year, or even come close to Char ANY year. Matt and I had a blast working together to fashion the kids' weapons entirely out of cardboard, duct tape, and hot glue. 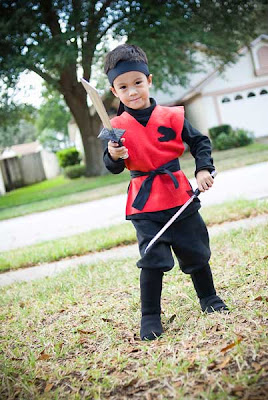 Miles as the "Red Dinosaur Ninja" with his accompanying short swords. 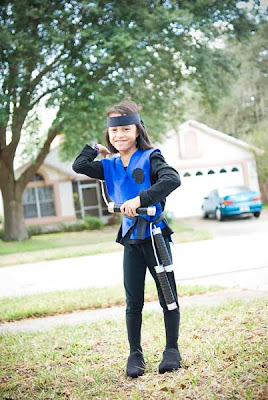 Abbie was the "Blue Eagle Ninja" who sported some furiously awesome nunchucks (which Matt has already laid claim to). 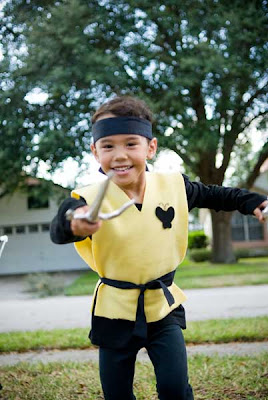 Anna as the "Yellow Butterfly Ninja" with the sweetest Sai you ever laid eyes on. 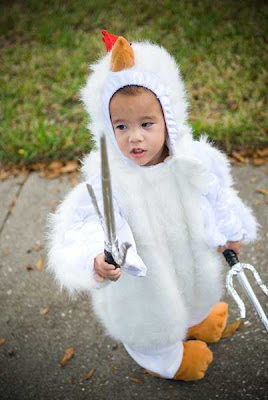 And finally, Lucas as the "Ninja Chicken." Okay, not really a ninja chicken, just a regular chicken but holy cow that boy loved Anna's Sai. This would be the same costume that Miles wore two years ago, which won the costume contest at my husband's work. And guess what? It won again this year. Freaking hilarious!

And, in case you needed an action shot: 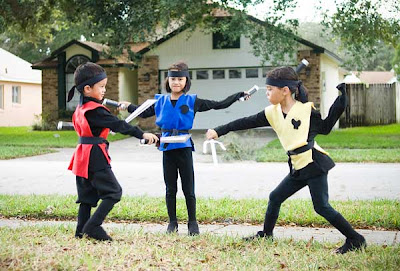 You do NOT want to get in the middle of THAT battle!
Posted by Alissa at 10:58 PM

how are you feeling these days??

See how do you get them to do a theme together? They look awesome. And I admit that my post titles have not been all that creative recently either.

Very clever. Not that I would expect any less from you. :) The chicken is so awesome. C u soon

You're right! I most certainly don't want to get in the middle of that fight...I have just one little pirate...and being anywhere near that is already dreadful! ;) I do think your little Ninja Chicken is the cutest little thing I've seen in a long while for Halloween...and that's only because my little pirate was a Dracula for Halloween...far from cute! haha! :)