Costa Maya (and the rest)

Our last Port was Costa Maya, Mexico.
Being that it was our last port, it was the one we had done the least amount of research on. We didn't know what we wanted to do, or how to get there. In short, we had no plans.

We decided the night before to just get off the boat and look around. According to reports there was a large pool just inside the port that was free. If all else failed, we'd just swim there. 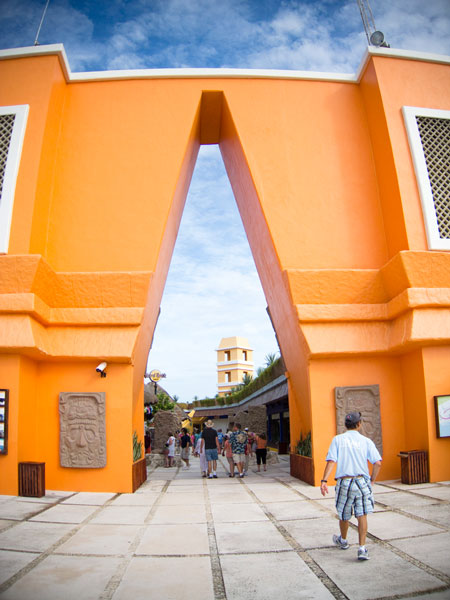 Lounging? Waiting for something to happen? Who knows?! 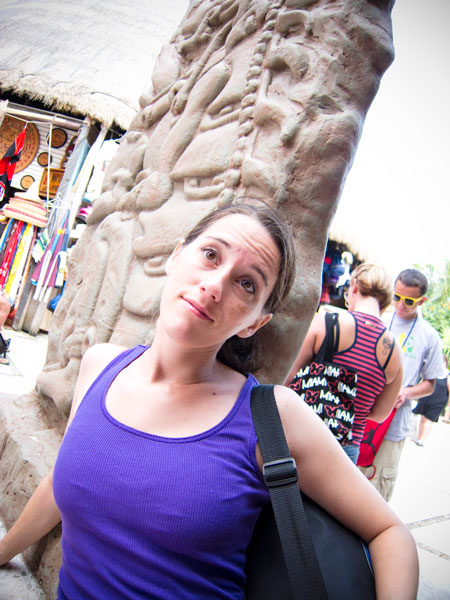 We did shop around quite a bit. We were on a mission to find Matt a hat. He'd been wanting one since before we left Florida. 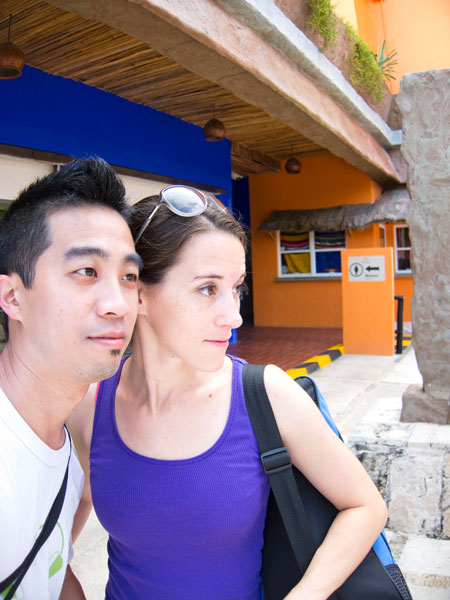 This is a lovely shot of us pretending we weren't taking a picture of ourselves. We are just so awesome. 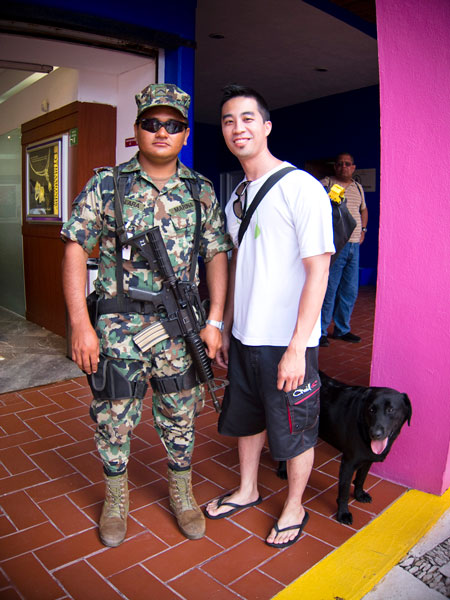 This was actually the first port where we ran into any type of law enforcement. That gun? Real. We asked to take a picture.  He begrudgingly told us: Only one. Twenty seconds later three hot chicks asked for a picture... he was all smiles.
What did we end up doing? Have I even told you about our love of the Golf Cart? No? 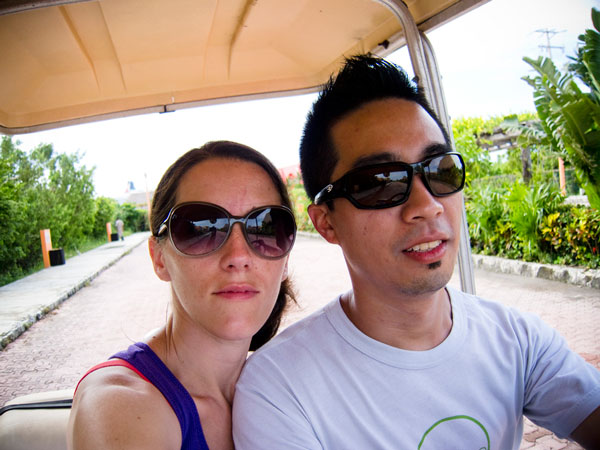 We ended up renting a cart for three hours. We drove all over the place in this thing. 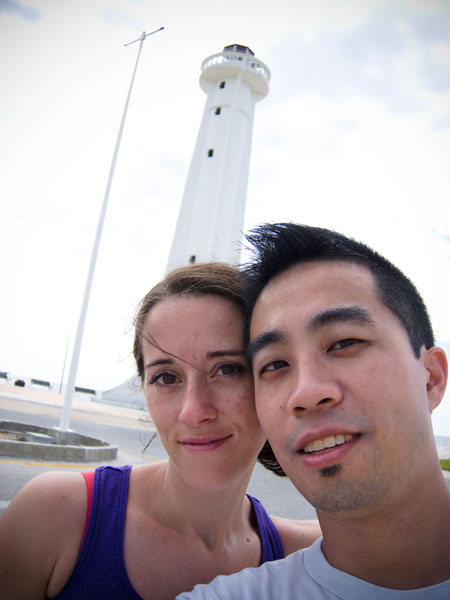 We ended up at a private beach that has a deal worked out with the golf cart people. They allow people to sit on their beach for free. We also had access to a sea kayak (had we wanted to go out ... I did. Matt did not). Plus, their drinks/etc were super cheap (in comparison to some of the places we had eaten). 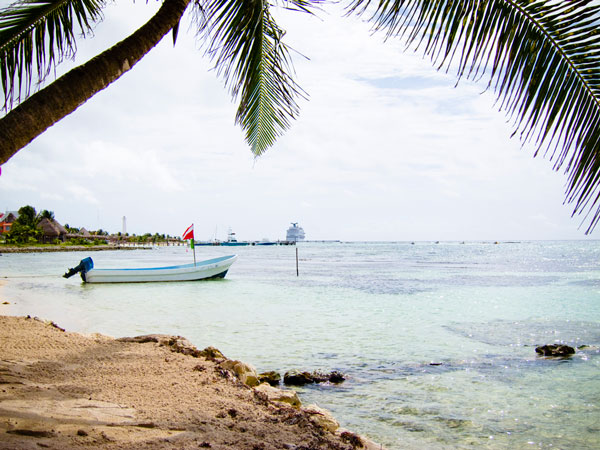 You can see our cruise ship smack dab in the middle of the picture. We did a little bit of snorkeling. Laid out for a little bit longer. 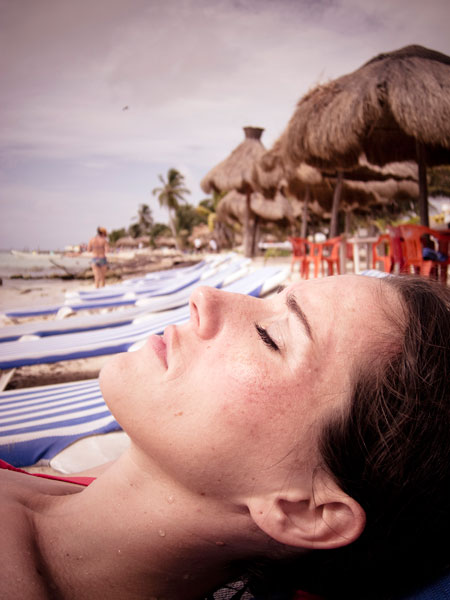 Poor me. I had to go there. Life is so rough. We did end up ordering a pina colada (virgin, of course) which Matt deemed the best pina colada he'd ever had. It was pretty freaking good. We walked along the boardwalk area (shops and beaches) for a bit... where Matt FINALLY found his hat! 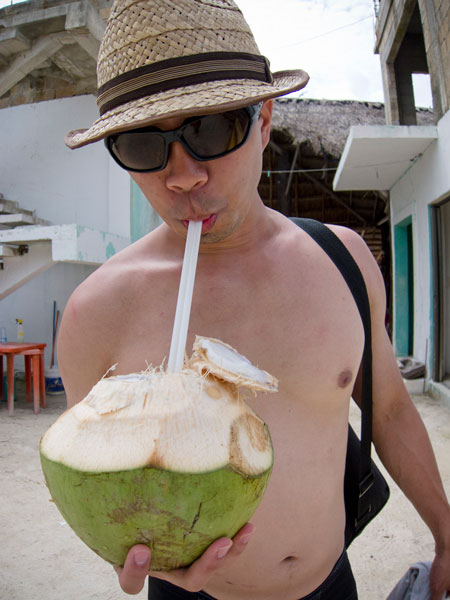 We enjoyed a coconut water. But between you and me, I'm not sure what all the hype is about.
We decided to hop back in the golf cart and go exploring. 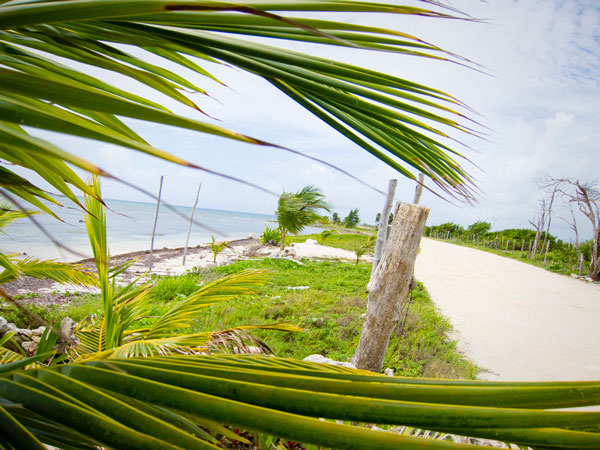 We drove along this little road for a couple of miles. It was gorgeous. 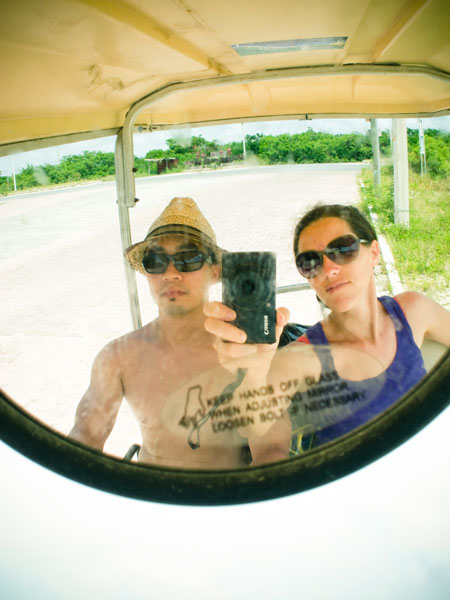 Did I mention we love golf carts? It's a disease maybe. 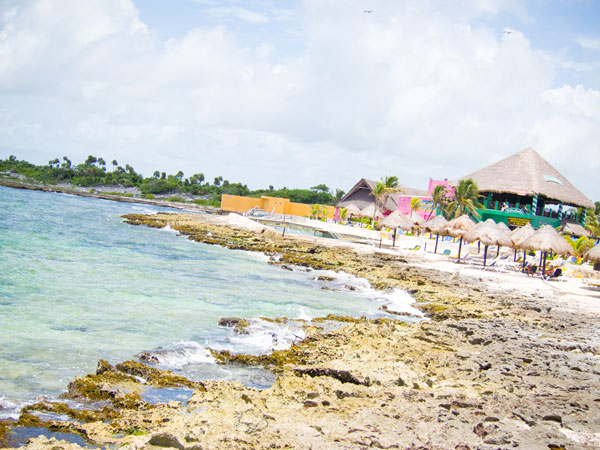 This was our view as we left Costa Maya. There is a pool like area over there... it's a dolphin tank. For the low low cost of your firstborn child, you can swim with a dolphin. It seems to us like something it might be worth it to pay for one of your children to do. 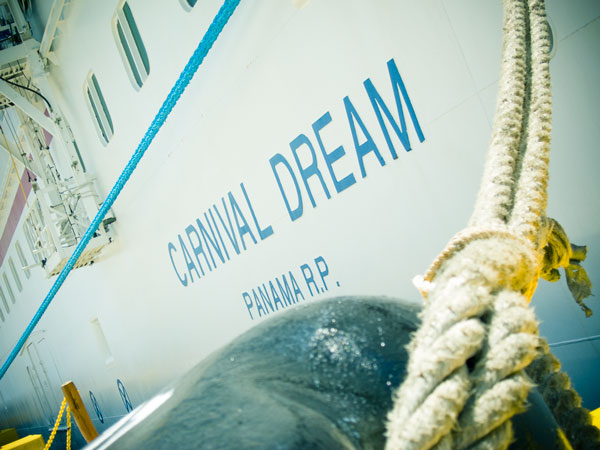 One last shot of the ship. It really was a massive beast of a boat. 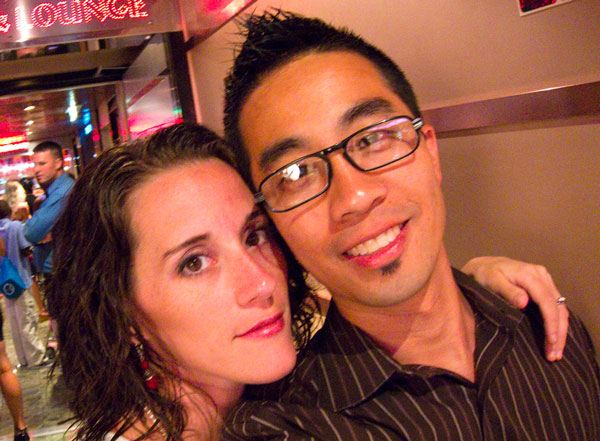 At dinner that night we were looking mighty crispy! And happy. Honestly, of the four ports I think Costa Maya was my favorite. It was just so relaxing. And beautiful and not nearly as touristy as some of the other ports.

The next day was spent entirely at sea as we sloshed our way back to Florida. We spent it napping, and hot tubbing. 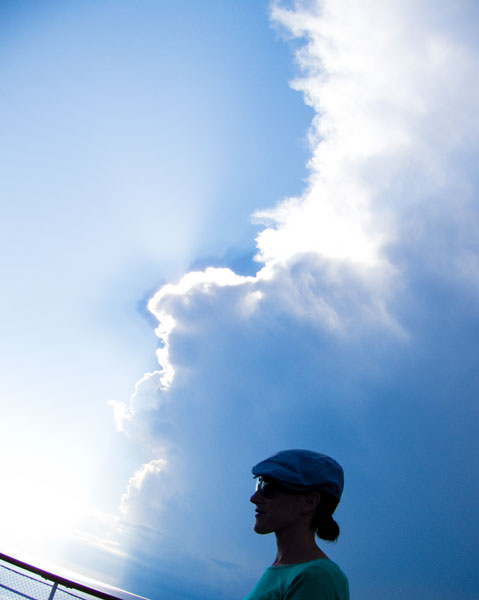 And we finally got around to doing the onboard Mini-golf. Don't we just look the part? 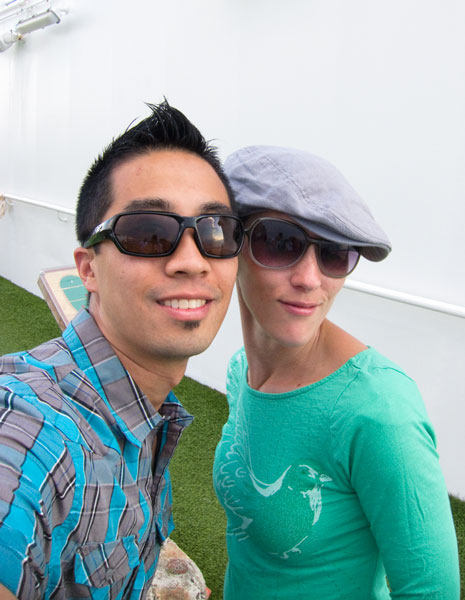 Apparently, I needed all my concentration. 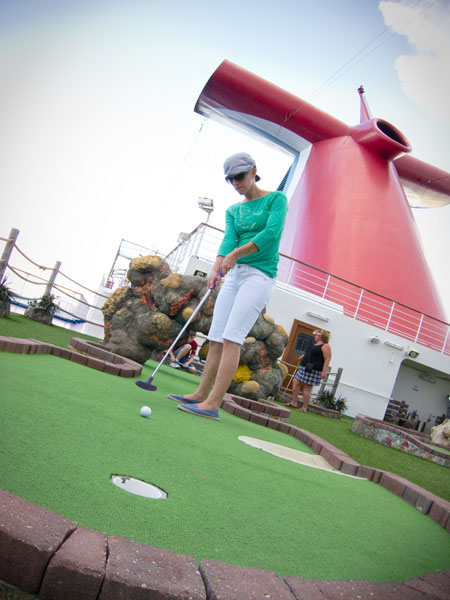 I have to say I was doing pretty well, even though we didn't keep score. 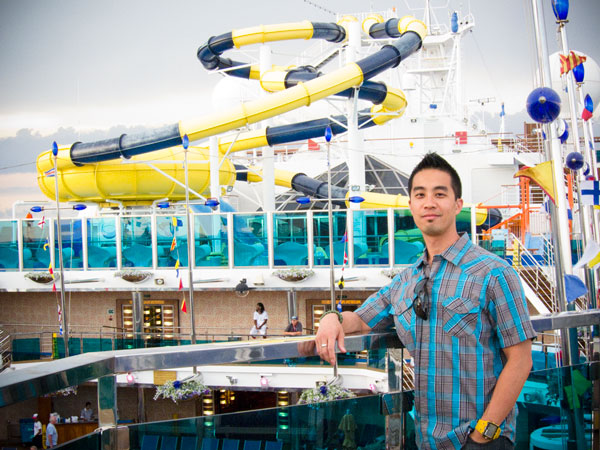 And Matt, featuring the one thing on board that we didn't get around to: the waterslides. It was always filled with kids and I didn't feel like waiting in line. 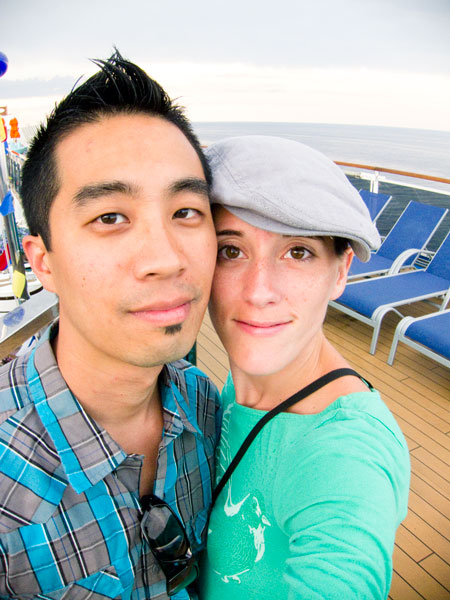 Don't we look refreshed? And happy? I know we felt it. 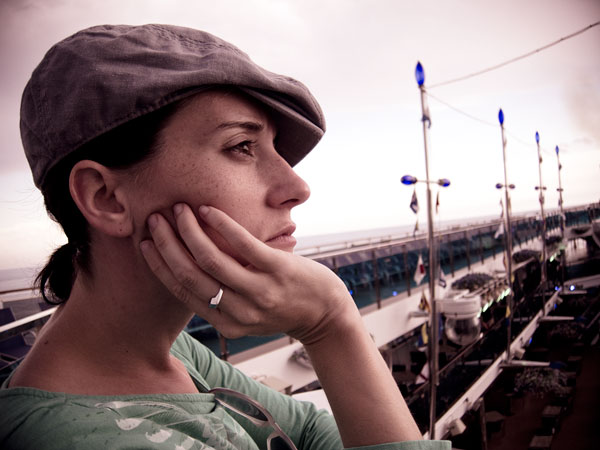 And finally. I never talked about our tablemates. We got lucky and they sat us at a table for four. Which meant that we only had to worry about two potentially strange dinner mates. But we needn't have worried. We got to meet Rakesh and Gurjeet. They were a very nice couple about our age (so what if we were older!) who were extremely pleasant! We found ourselves looking forward to dinner so we would have someone to share the day's adventures with. 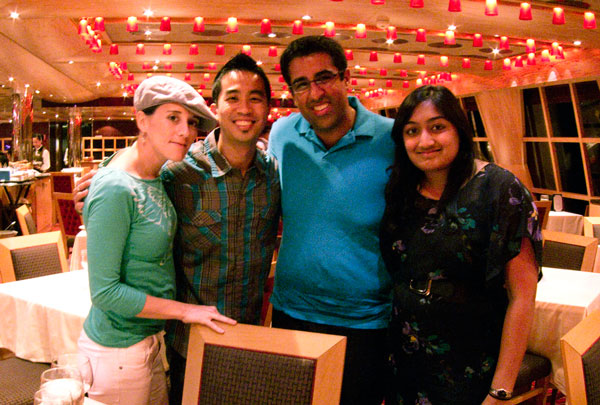 Yes, we've already friended them on Facebook.
That brings our cruise travelogue to a close. If you have any questions, feel free to ask them here.
Posted by Alissa at 9:57 PM

yay! I had so much fun reading about your adventures. I'm sure we'll be using this as a reference when we plan our cruise for some day. :)
Young coconut is my favorite! You drink the coconut water, then eat the young coconut. It is like pudding. So delicious! But it is also a laxative, so I highly recommend that you don't eat more than one at a sitting. (Not that I would know from personal experience or anything.)
Thanks for letting us vicariously go on a cruise!

Such a good series of posts! I've never done the cruise thing (or been south of Florida, for that matter) so reading about how it actually works, plus your thoughts about each port was really interesting. It was also fun to see "the parents" in so many pictures! You both look super relaxed and happy, much deserved. :)

No questions. Just loved every bit of it. I will certainly check in with you when I get to go on a cruise. If that ever happens.
You look so great in all the pictures.