After pestering and bugging Matt for several months, he finally relented.

Make a guess. Win a prize.

So, as some of you know, I'm an avid scrapbooker. LOVE IT. Though, I'm not as into it as I once was. Did you know that once upon a time, I had a page that I created published in a scrapbooking magazine? Crazy, I know.

Well, I've gotten lazy in my filing of pages. I do the same thing with laundry. I wash it, I dry it, I fold it and then just. can't. seem. to. put. it. away. I know some of you suffer from this same syndrome. So, I have this rather large pile of pages sitting around. They're waiting for me to put them into a page protector and into an album. 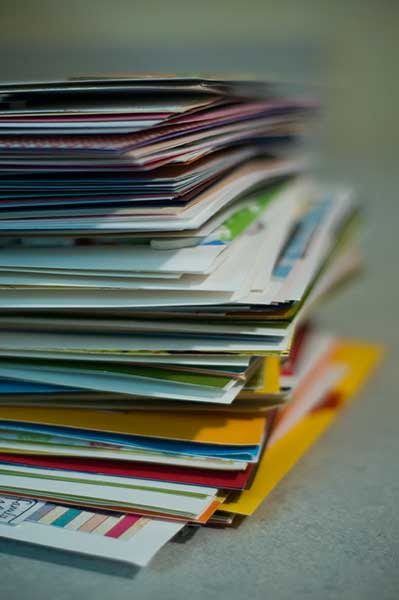 Here is where you come in. Make a guess. How many pages are sitting there? The person closest to the right answer without going over (I'm channeling Bob Barker) wins a tie appliqued onesie in size 3-6 mos (I'm lazy and that's the size I have on hand).

By request, you can view a very small sampling of the pages here.
Posted by Alissa at 10:41 PM 19 comments: 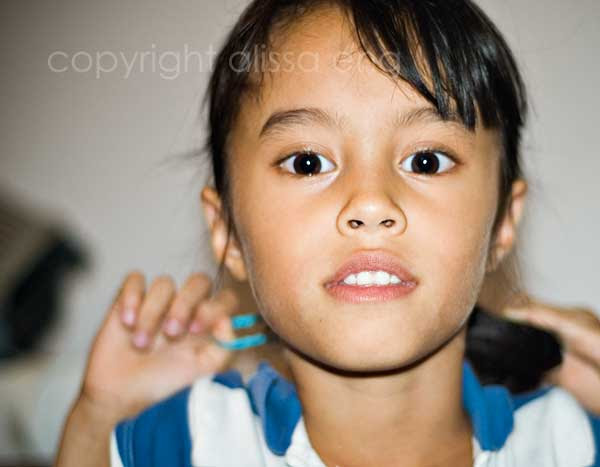 P.S. Miles stated that he was voting for President Monson. And really, isn't that a better option?
Posted by Alissa at 6:26 PM 14 comments: 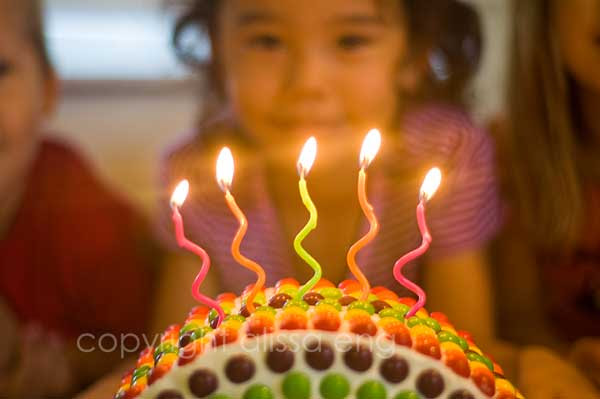 Anna celebrated her 5th birthday on Thursday through Saturday. First, her preschool class had cupcakes in her honor on Thursday, then on Friday (her actual birthday) we took her out for a birthday lunch and then Matt took her Chuck E Cheese's for dinner and some games. On Saturday we had her "Friend Birthday."

And while Anna's way into girlie princess goblety-gook, I'm not. So, I had seen this book on someone's blog way back in June and decided to make this cake (though I didn't buy the book.) I mean, how hard could it be? I've made some pretty fabulous cakes! And I was right! Check it out: 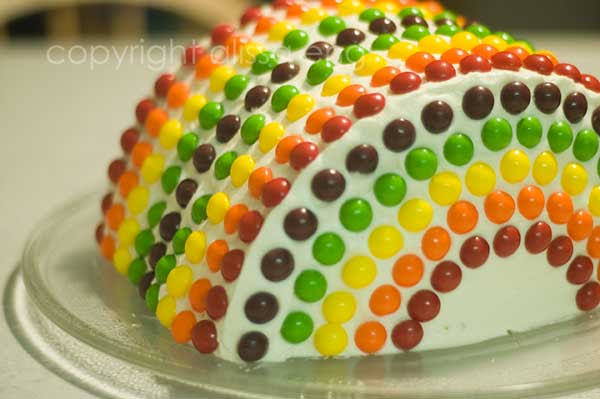 Yeah, I'm pretty proud of myself. 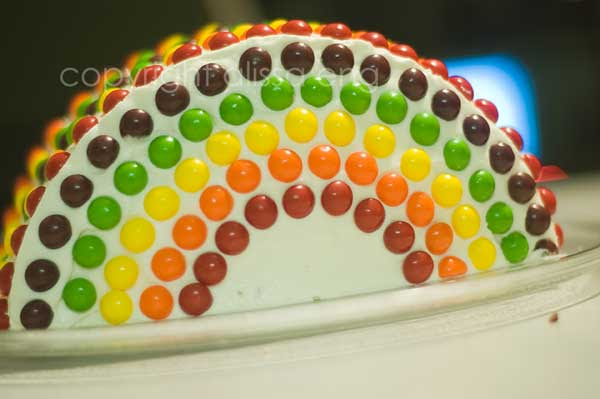 And so a 5th Rainbow Birthday Party it was!
The kids played Hullabaloo (if you don't own this game and have Preschoolers (3-5 years old), you've got to get it), painted on a huge sheet of paper, and had a treasure hunt. 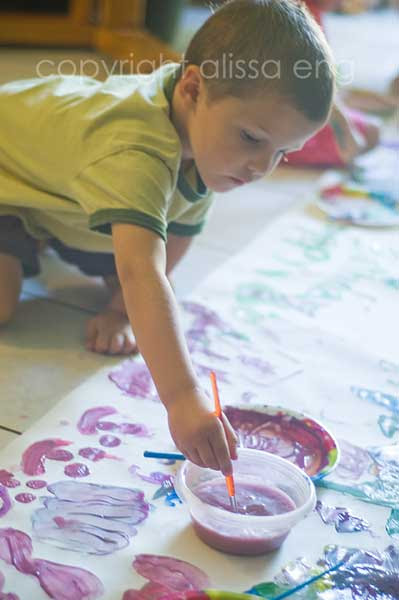 I think it was one of my more successful kid parties! 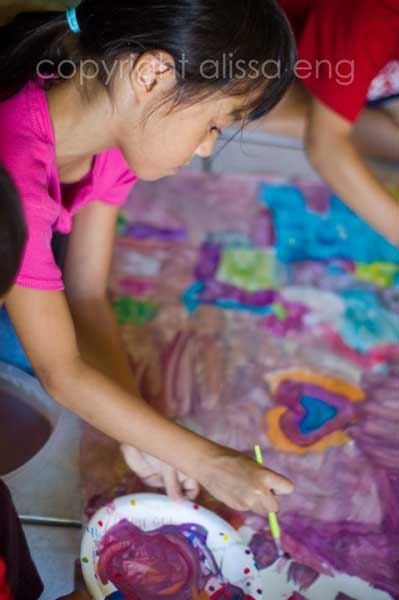 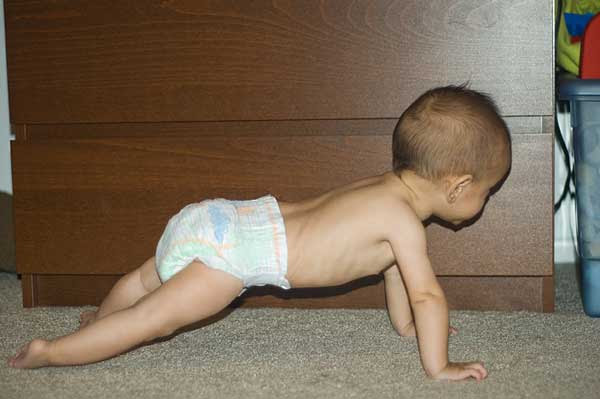 I wish I had something more exciting to show you. In exchange for something super exciting, I'll trade you several somethings only mildly interesting? Deal?

I spent a good portion of last week organizing my scrapbooking area. 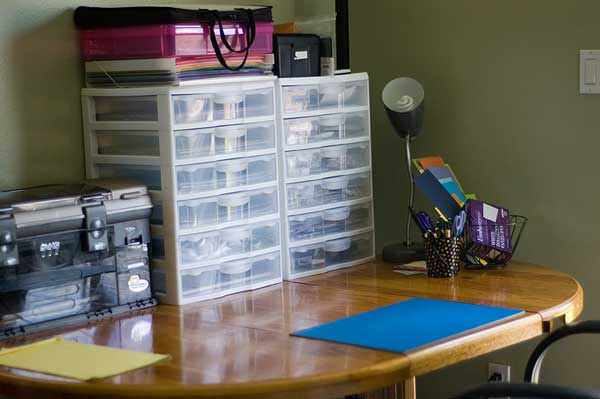 I know! I can finally get some "work" done! I've probably got enough stuff to actually get me current on pages (I'm running about 2 years behind.) 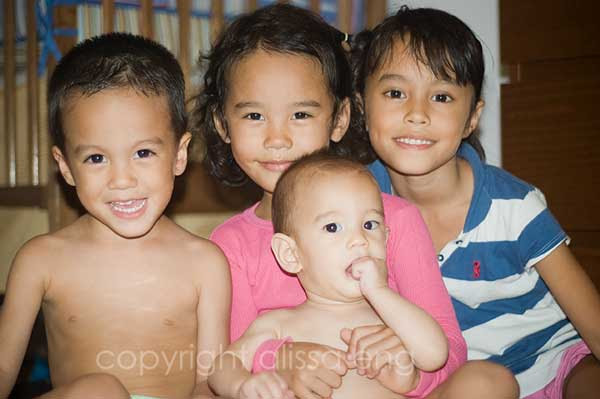 My kids are trying to kill me. Today, for example, Anna and Miles found a bottle of black ink that I didn't even know existed and spilled it on the carpet (we rent!) in the walk-in closet in my bedroom. There's no coming back from that... unless you mean, "Goodbye security deposit!" 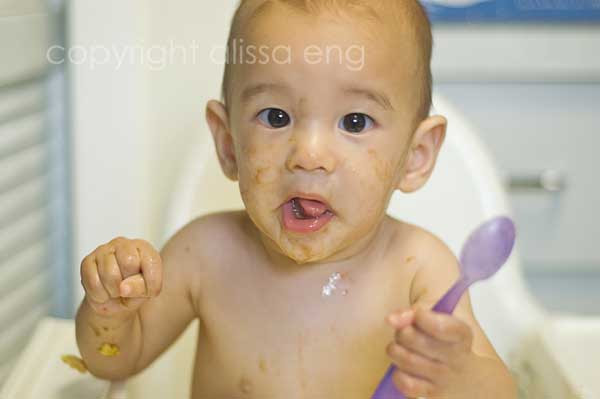 Lucas does love him some solid food. Of course, he has not yet fine-tuned the method of actually eating it. Mostly, he enjoys smearing it around his face. 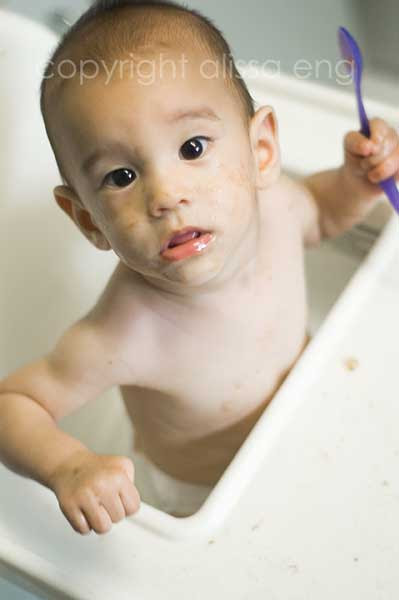 I found this picture just now on my husband's Facebook page. (Yes, we're both on there.) 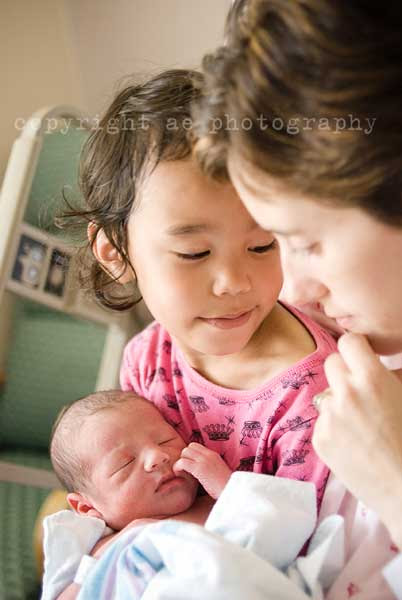 And I just can't get over it. My teeny tiny new baby. My little girl (who celebrates her 5th birthday this week.) and Me.

Been struggling with my identity lately. Been wondering where the mom part of me ends and feeling selfish about having a part of me to myself. I'm not sure that makes any sense whatsoever, but it is what it is.

This picture makes me feel like I can almost see my Heavenly Father in my life. The way the light is hitting Anna. Lukie's tiny hand on his soft, hours old face. God has touched my heart. And because I need to be more grateful:

My Cutes can beat up your Cutes.

Ok. Let's be frank. There is some force which is causing my kid to be cuter than all of yours. I think it might be the Asian thing. Because, hello, have you seen ME lately? Not cute. 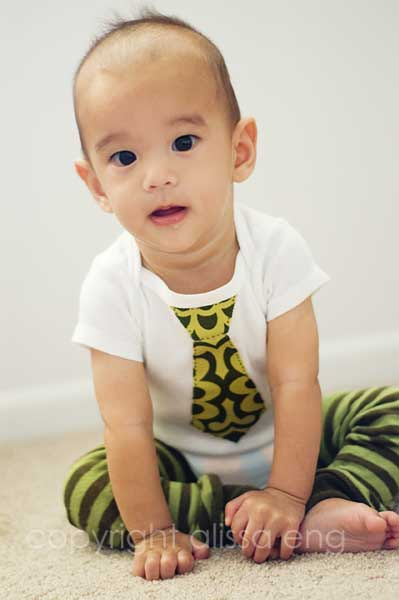 Char posted about the tie onesie she made for Bent, after seeing the one I made for Lukie. So I thought I'd give you a better look. Because it deserves it. So so cute. 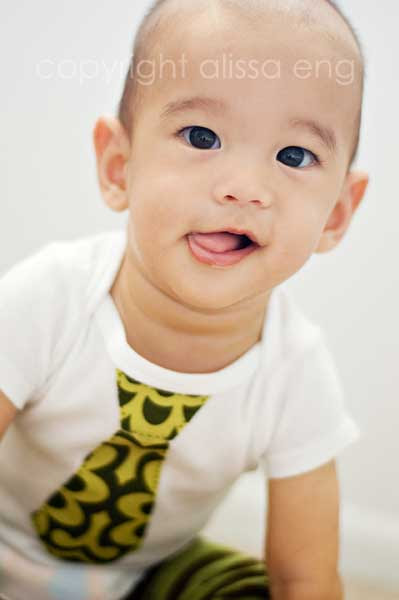 Yeah, I'm not really sure if I'm talking about the kid, or about the clothes, either. 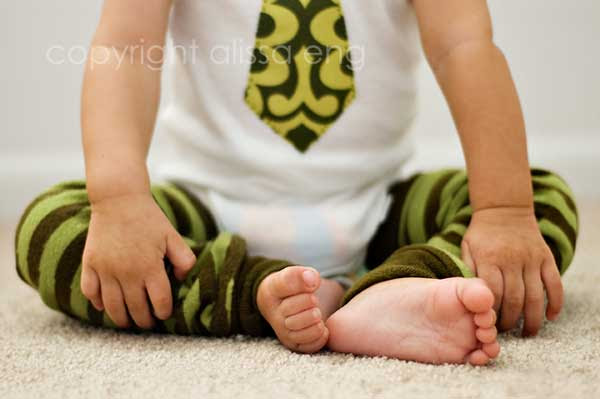 But I think we could take Bennett in a fight. Or at the very least I'm sure I could convince Lukie to drool on him. Even if he is adorable.
Posted by Alissa at 10:20 PM 14 comments:

While most of the rest of the country is gearing up for their colder months with things like jackets and socks, we're still living it up at the beach. Neener, neener Autumn! (This is merely my way of attempting to taunt you into making a visit here.)

Some good friends from our very first married ward (GO BYU 59th!) are in town this week doing the whole Disney thing. They had a single day when they weren't scheduled to partake of the magic, so we took them to the beach. A place we haven't been since Memorial Day 2007. Yeah, it's been awhile. Matt doesn't like sand. I blame him. 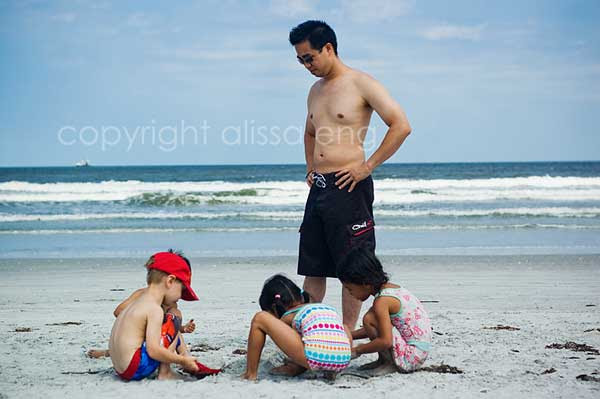 Matt, overseeing the kids. Or telling them to stop throwing sand, or something. Lucas refuses to go to sleep while I hold him, but if he's tired and I hand him off to Matt, he's asleep in an instant. 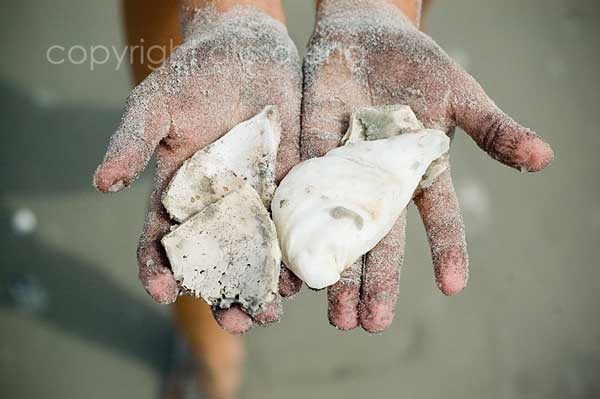 Abbie spent the entire time collecting shells. I was an incredibly mean mom and wouldn't let her bring home all 300 shells she found. 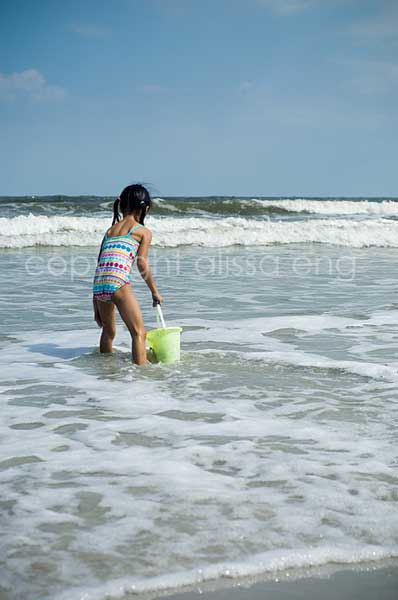 The water was so delightfully warm. I'd have actually gotten in, if I didn't have a child trying to eat sand. No, not Miles, the other one. 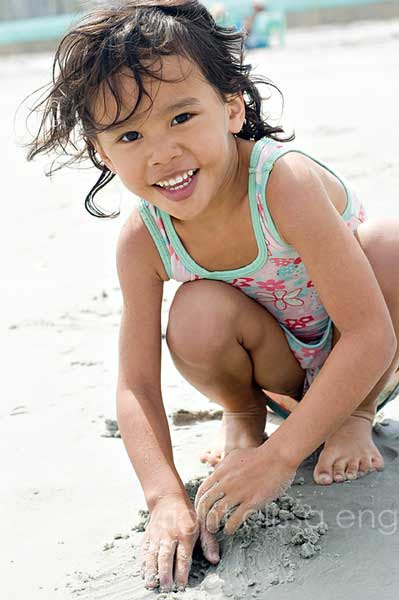 Anna, also known as Abbie's shadow, had a great time. However, brushing her hair afterwards was kindof a nightmare.

We've officially reached that magical age of 6 months. I can honestly say that I have no clue where the last 6 months went. I feel as though I've been stripped of most of my brain cells and sent through a time warp to some alternate parallel universe where babies rule the earth (or at least my world). I guess motherhood will do that to you.

I mentioned before that the LucLuc (another sad nickname) is trying to become mobile. I have devastating proof. (And please excuse the less than stellar pictures. Yes, I take snapshots, too!) 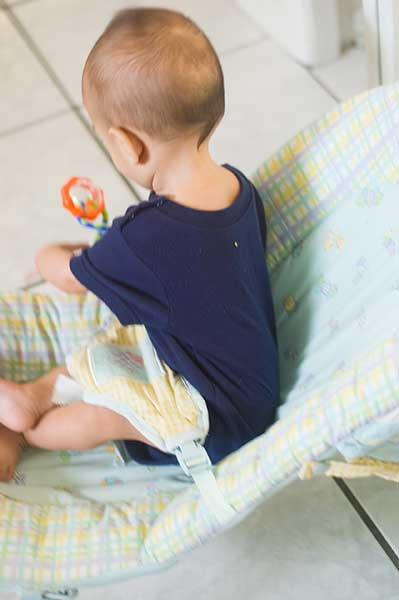 Let me explain what you're looking at. Lucas is quite literally climbing out of the bouncy seat. No, he does not have permission. And yes, it scares me.
Another sign that he's getting revved up for some serious moving. 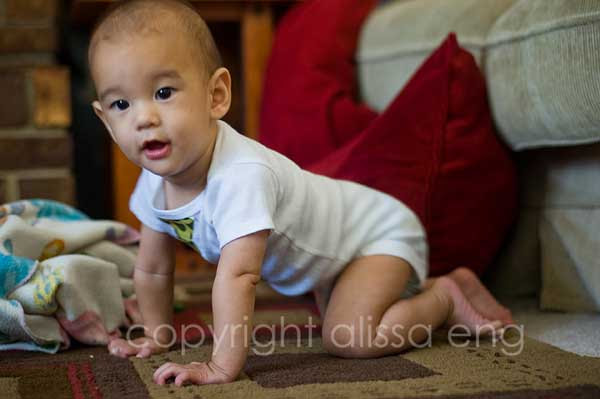 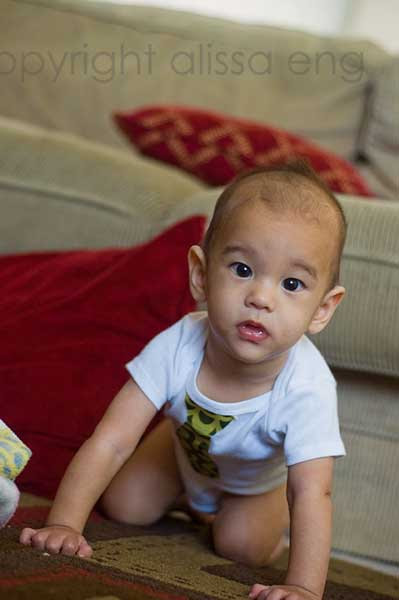 He just sits there and (so far!) rocks back and forth and grunts. It's really quite cute.

And this was added just to bring on a little festivity. 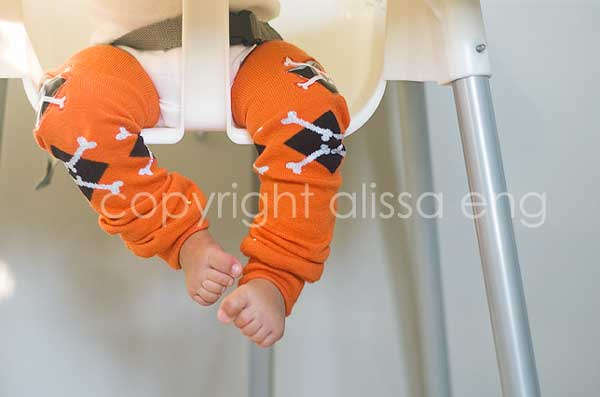 Just a snapshot of us. 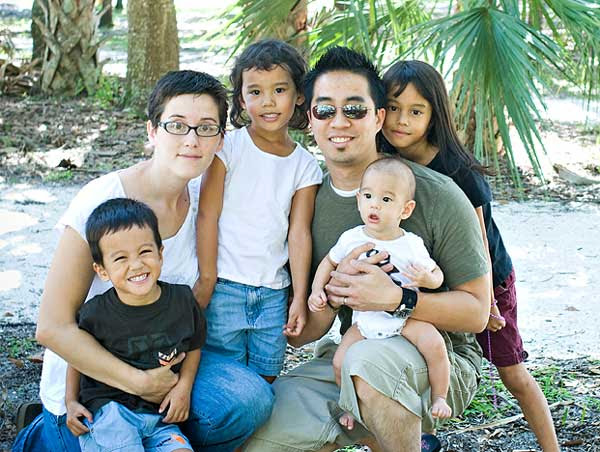 For example. We had planned to celebrate Miles's birthday last Sunday. However, he fell asleep right before dinner and we went ahead and (shamefully) ate his birthday cake without him. So, the next night for FHE we had a quick lesson and then I held a single burning candle while we sang him Happy Birthday and then let him open presents. So, no pictures of that. Well, on Wednesday (his actual birthday)I was feeling guilty that he probably felt a little gypped. (Okay, he probably couldn't care less, but I thought he was getting the short end of the birthday stick.) I packed up Miles and Lucas and a candle and lighter and we were off to a Miles-chosen destination for lunch. And of course that means we went to Big Ron's Steakhouse (thank you Courtney!) 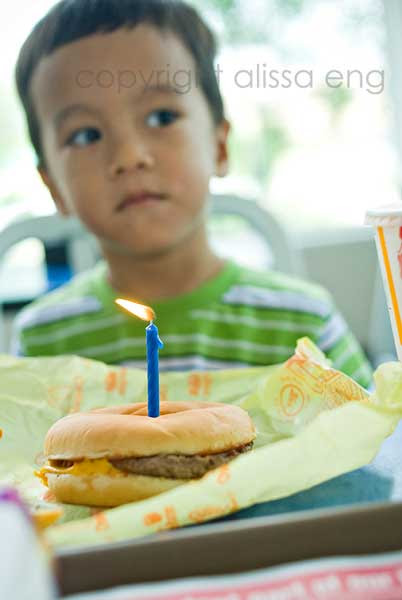 I ceremoniously lit the candle, sang him the song and voila... instant birthday.

Miles loves to help me clean during the day. He's very helpful. Sorta. 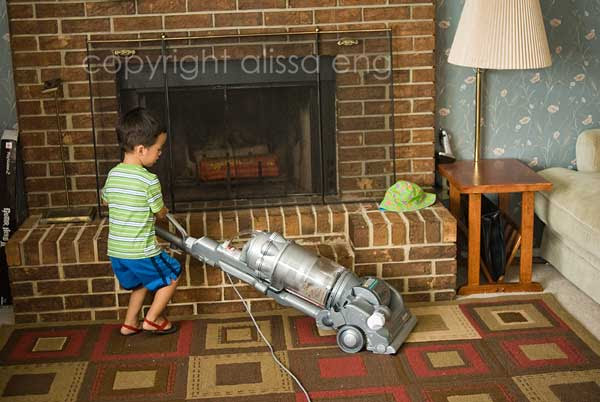 Today, for example, he helped me make Pumpkin Chocolate Chip Cookies. I even let him lick the beaters. Does that earn me some good mom points?