After much deliberation, we decided to have a Family Movie Night on Friday.
There was popcorn.
There was pizza.
There were gummy bears. 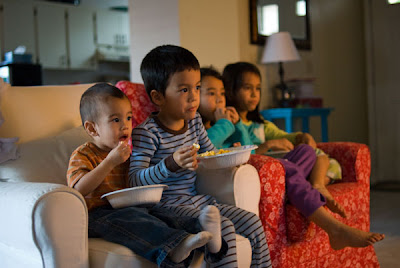 There were stunned children.
There were wide eyes.
There was much excitement. 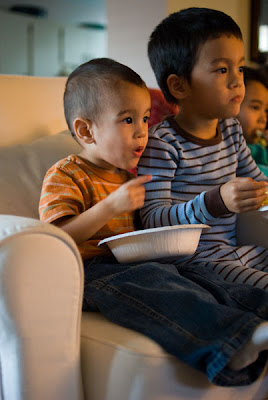 There was this man. 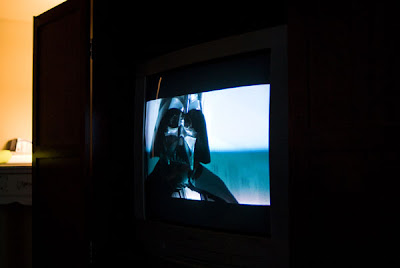 And since then, there has been many many pictures of Death Stars and R2s and Luke's Medal.

(Yes, that's right. Until Friday my children had never seen the movies. We only watched Episode 4: A New Hope. We're old school that way.)

Next up. Swiss Family Robinson.
Posted by Alissa at 9:16 PM

Jooj refers to that movie as "The Good Guys and the Bad Guys."

Also, I want to look at Libby Lou Who in her hat and knickers every day. Please make that picture into a 300x300 so I can wallpaper my living room with it.

my kids LOVE swiss family robinson! after they watched it all they could talk about for months is getting to be stuck on an island like the robinsons.....it too is one of my all time fav movies

Can they make the light sabre noise yet? They look so sweet and so involved with the whole Cinematic Event.

They HAVE seen The Wizard of Oz, right?

So very sweet, all of them. I love this age.

Warm hugs and quiches from Kitty

Hello I just love your blog!! It is so sweet!!!
We had movie night on Friday too and we saw the Princess and the Frog!! We had such a great night!!!
Happy Monday!
Jenn~

We showed our kids Swiss Family Robinson recently. It was so fun to watch it again.

By the way, totally going to try those ruffles on the jeans. They are so cute.t

Tab would be jealous if he knew Miles saw it. He wants to watch it, but we have yet to let him watch any movies like that.

thank goodness! #4 is my favorite!

That's so funny... my little man just watched Star Wars (It was just called "Star Wars" when we were kids, right?) for the first time last week. I wanted him to start with what I started with. Swiss Family Robinson? I totally forgot about that one. Jack will love it! Thanks for the suggestion. BTW, did you get my email?

What an awesome idea for a family movie night! There is something magical about watching Star Wars for the first time. :)
This post motivates me to try and do more fun things with my kids.