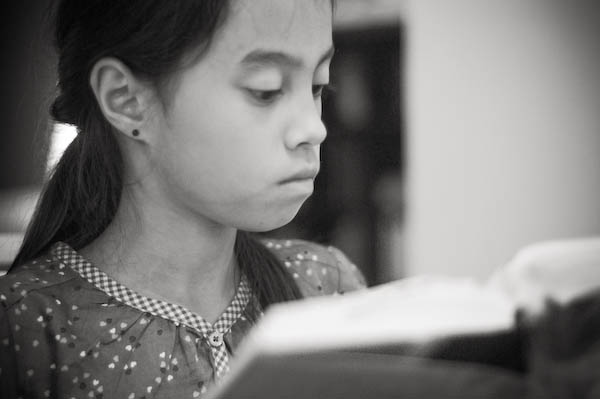 Abbie loves to read. Loves it. However, she has this tendency to balk when I encourage her to read a specific book, as if my recommendation seals its fate as a terrible book. And by balk, I mean, throw an insane hissy fit. So, for years (literally at least two years) I've been trying to get her to read Harry Potter. She even read about 1/2 of the first book last year. But, for whatever reason, she put it down and claimed it was boring.

So, because I don't want to seem a pushy mom (I totally am), I laid off. A couple of weeks ago, both Anna and Miles started showing interest in reading the books. I suggested we read them together, as a family.

I think I got about four chapters into the first book before Abbie commandeered it, finishing it in under a day. She is now about to start the seventh book. On Saturday, we attended Universal Studios (with free tickets from the husband's employer) and purchased for her, her very own wand. These are not toys. They are uh... expensive($35). And they break easily (or so we are told.) Abbie picked out the Luna Lovegood wand.

The promise is that when she finishes the books, the wand is hers. I don't think we needed to incentivize her, but it doesn't hurt. In the meantime, she can't get her nose out of the books for anything. Things could be worse.
Posted by Alissa at 7:41 PM

To be fair, the first HP book starts off slowly. I started it years and years ago and didn't make it to Hagrid's appearance. I picked them up much more recently, and loved them. Much like Abbie, I couldn't put them down.

I don't usually like to read books that people rave about, but only because then I generally set myself up for something way more wonderful than is possible and am let down. And I never finished all the HP's either. It's like, once you know that Harry ends up with Ginny and Ron ends up with Hermione, what's the use of continuing?
She's so cute. Abby, I mean.