This picture is worth 1000 words 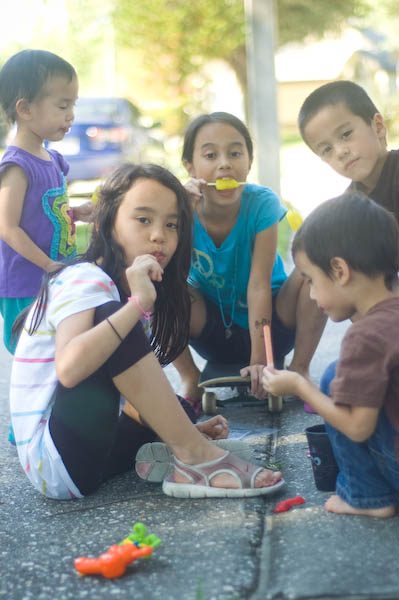 After school the kids are required to get their homework and their chores done and then if there's time left (which there is often not due to feet-dragging) we can go outside and "play."

Apparently, "play" at our house includes popsicles. It must. There is hell to pay on my part if I suggest we go outside to play without having an ample supply of popsicles on hand. Perhaps this is due, in part, to the incredibly warm weather we are already experiencing.

Items to note in the above picture:
1. Lucas has no shoes on. Never does. Recently we went on a run as a family on the bike trail that runs behind our home. Lucas failed to wear shoes. He also ran most of the way. It was nearly 2 miles. Get that boy some FiveFingers!
2. He also just dropped the remainder of his popsicle on the ground. He proceeded to eat it off the ground. At least until the ants got to it.
3. Anna's a poser.
4. Also Abbie with the posing. Geez.
5. Miles is looking so very GQ. I'm sure it's because his brain can finally breathe again. That boy has the thickest most insane hair. SO MUCH HAIR. And he detests haircuts. It takes me weeks to convince him.
6. I'm sure at this point Libby is scavenging for whatever popsicles are left, having finished her own. In fact, I can see that Abbie has already given Libby half of what she had left. That child can eat! And also, scarf popsicles with the best of them.

See? Much less than a thousand words.
Posted by Alissa at 5:00 PM