Being that Cozumel was our first port, Matt had done a lot of research about the best way to get around, what to do, etc.

The way I describe your excursion choices is by tiers.
Tier 1: Book through Carnival. Everything will be organized for you. But you will be in a group with a million people. Also, the most expensive option.
Tier 2: Keep walking. After you pass all the Carnival people, there will typically be another company waiting there to offer their version of Carnival's excursions. Pretty reliable, smaller groups, about 1/3rd to 1/2 less expensive than booking with the cruise line.
Tier 3: Keep walking. You will come upon a somewhat sketchy looking group of locals who are willing to drive you (usually no more than 2 people) all over the place in their own car. Usually, dirt cheap. Sometimes, (as in the case of one of our shipmates) they may need to take a detour to go to a different dock and pick up a package for their brother and deliver it before they can take you where you wanted to go. Possibly a little scary.

For all of our ports we chose options 2 or 3.
In Cozumel, we rented a car. Not just any car. This sweet little ride: 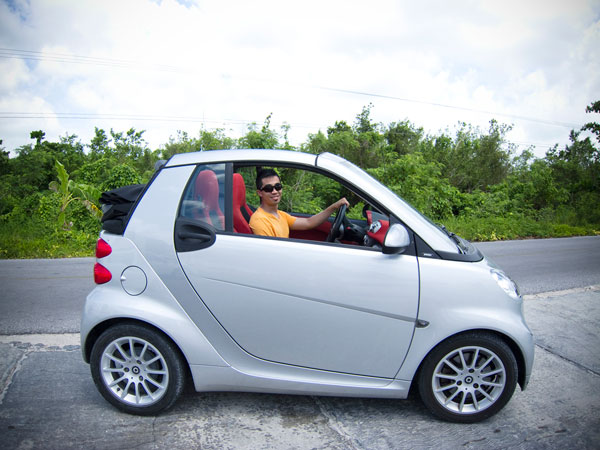 A convertible smart car. It worked perfectly and cost the same to rent as a compact would have. Plus, when you're driving on crazy streets that you aren't familiar with... yeah. Smaller car is better. 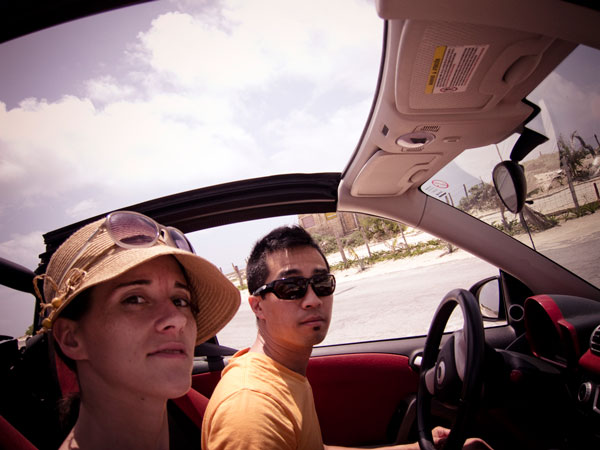 Also, check out how awesome we look!
Speaking of crazy streets...I guess I need to point out that I have never been outside the United States unless you count going to Canada (and I don't). We had been driving for less than a mile in Cozumel and we came across this nice gentleman. He was a one man pothole filling machine. No cones. No orange vest. Just this one dude who carried about his job while people whizzed by him on both sides. 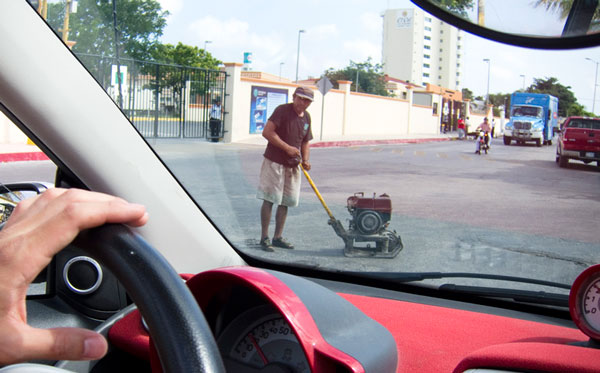 The plan was to drive out to the San Gervasio ruins which are the largest Mayan ruins on the island of Cozumel. The drive out there was lovely. I am continually awed at some of the ramshackle places that people were actually living in. I don't think I can ever complain about our home again.

Matt has plans to paint this home. Probably minus the car. People in Cozumel are not afraid of color. 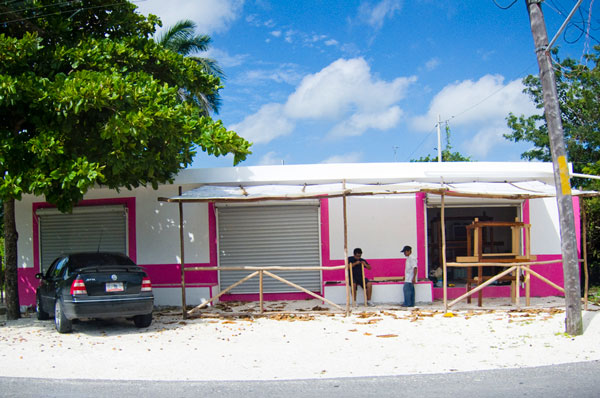 According to the very nice and knowledgeable tour guide at the site the San Gervasio Ruins were once a hub of worship of the goddess Ix Chel, deity of the moon, childbirth, & fertility. Apparently, it's where everyone went to get married and get pregnant. I told Matt we chose the wrong ruins as I was NOT there to get knocked up. 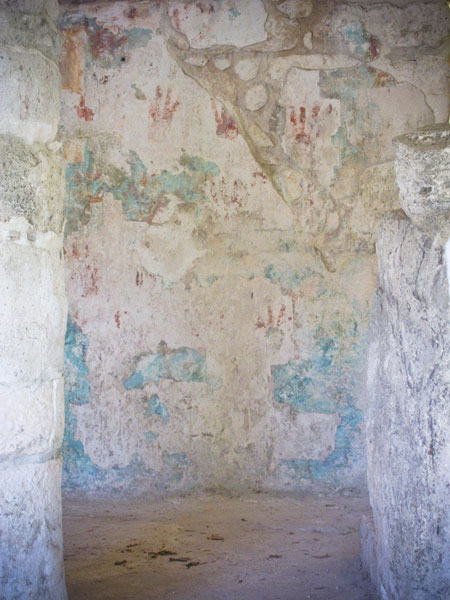 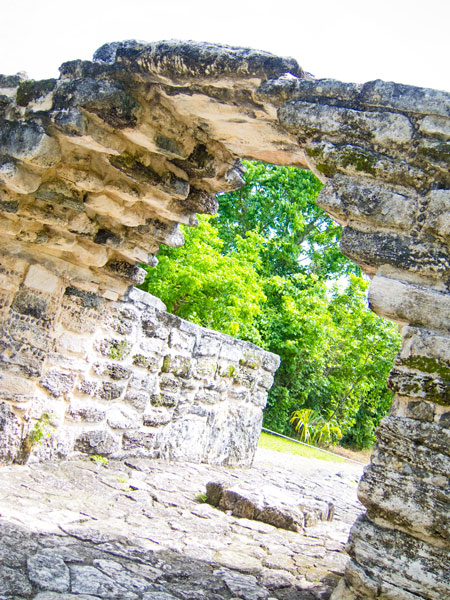 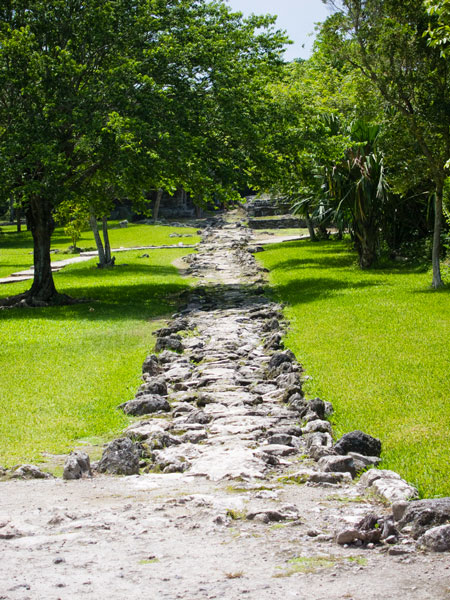 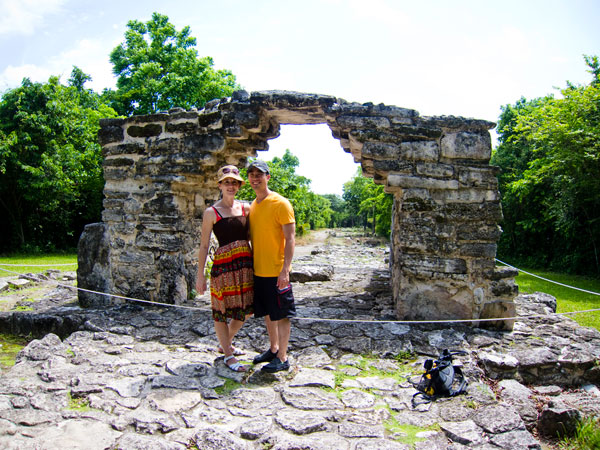 There were a lot more pictures of the ruins, but frankly, you have to be there to enjoy it. The pictures don't do them justice. The reason these are ruins instead of more fully formed buildings is because when Spanish explorers came knocking, they blew the place sky high looking for Gold. Nice, eh?

One of my favorite parts of the park is that it is also a wildlife refuge. I saw about 20 (probably more) large iguana just lying around. 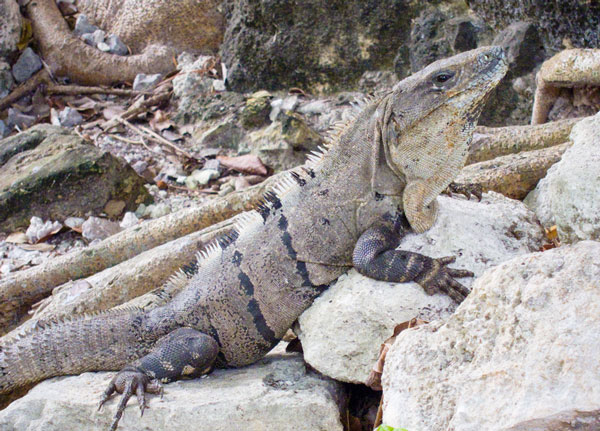 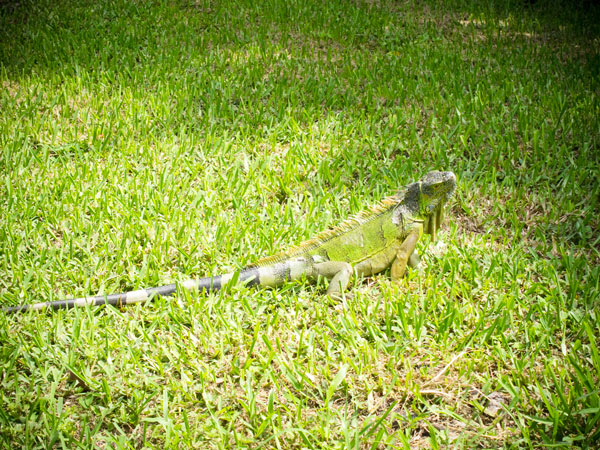 Apparently, they don't bother people. We'll talk more about iguana when we go to Honduras... 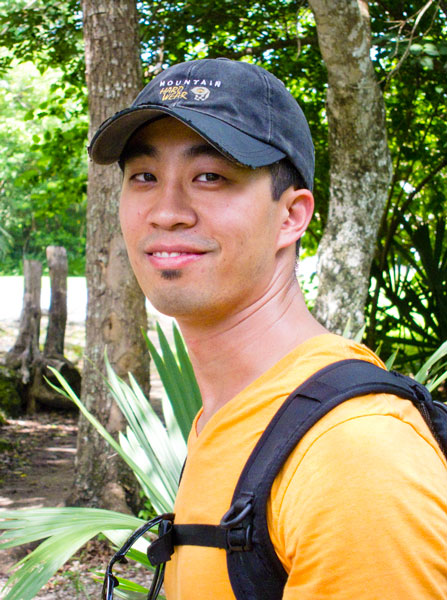 The worst part was actually the mosquitos. I put on a TON of bug spray and sunblock and while my lily-white skin didn't get burned, I managed to walk away with about 8 bites. 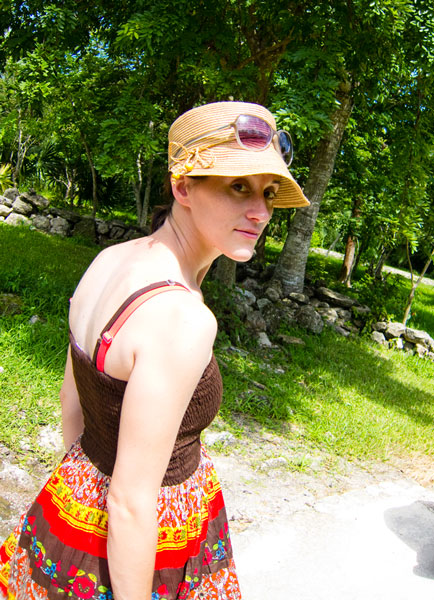 After we left the ruins, we drove over to a recommended restaurant (apparently, locals will ALWAYS refer you to a tourists restaurant). When we got there it was nice and quiet. Just Matt and I in the entire place. I ordered fish tacos and Matt ordered grilled fish. While we waited for our meal we sipped on $3/bottle water. Grrr.... AND THEN.... Two (2) tour buses arrived with people from a Carnival excursion. We were SO annoyed. Fortunately, we ate quickly (and our food was pretty good) and left. 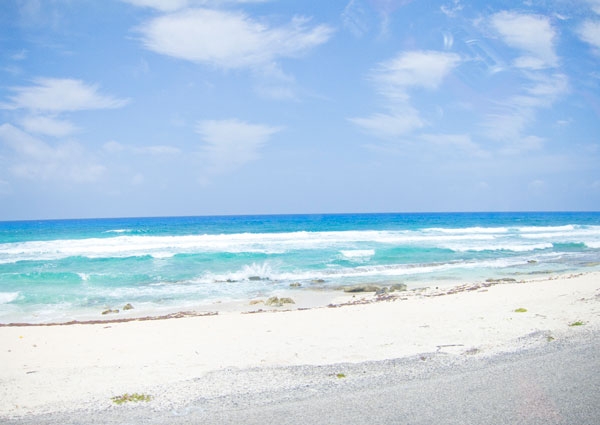 This was the view as we drove down the coast. California and Florida have got nothing on this.
We stopped at one of the free beaches on the way (Corona Beach) where we did some snorkeling. We don't have any pictures of anything we saw because we didn't have an underwater housing for the new camera and our experience with disposable underwater cameras is not good. We got to see some brain coral, lots of little fish that seemed to follow us around and even a barracuda. We returned our rental car, haggled with some vendors for some souvenirs for the kids and headed back to the boat. 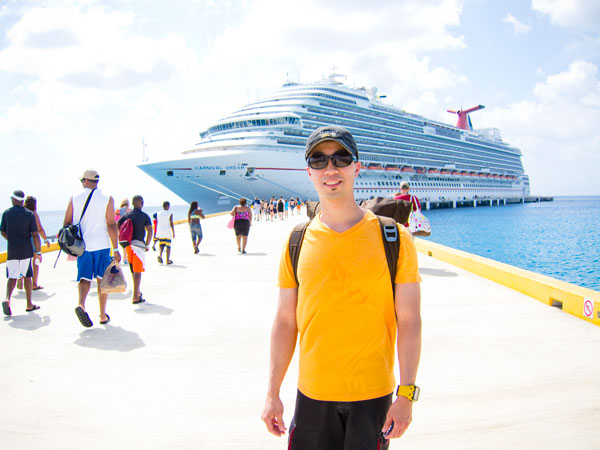 Overall, Cozumel was our least favorite port. It was the most developed and definitely the most tourist driven of all our destinations. We had fun anyway!