If you're easily offended this is not the blog for you.

Story Part One or Why I Think This Is Hilarious: Forever ago, I belonged to a message board with some of the most hilarious people I know. I'm pretty sure it was Val's fault (blogless) that we all started using "THE WORD" again. I say again, because it's not a word I've used since... 4th grade, maybe?

Story Part Two: At my husband's work they have a roundabout for dropoff, etc. People were driving entirely too fast through there. Almost like in Roller Derby (geez! anyone remember that!?) when they would slingshot each other through the rink... where was I? Oh yeah. So, they decided to put in some deterrents. To the rest of the world: Speed Bumps, right? Well, apparently they made the speed bumps a little too tall and they failed to paint them for the first couple weeks. So, everyone and their brother were totally bottoming out. Finally, they put in a sign.

Here is where you see just how totally mature I am: I went to my husband's work today with no intention of seeing him, just to take this picture. 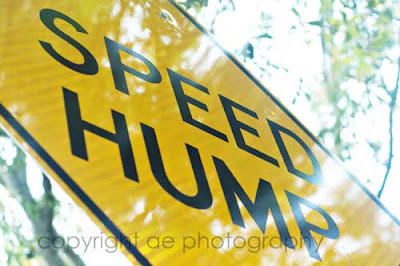 Also, do you think that the M. here stands for Men? Wow. That is fast! 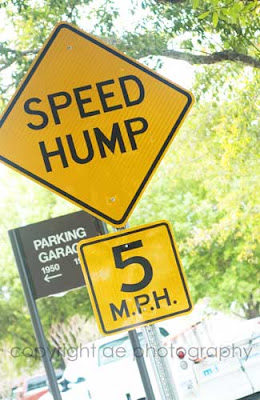 Totally ROFL!! I'm glad I'm one of the most hilarious people that you know. I miss that board- even if it made me E12.

That sign? Humpin' hilarious! The office across from Steve's? Nevada House of Hose. I find that freaking hilarious!

HA HA HA HA! Remember that picture I took of Macy's dolls in a compromising position?

Oh those are cool pictures!

That's too funny! Nice image too!

ROFL!!!!! I am dying laughing! Great photo and composition of it as well! LOL

That is entirely too funny! I need that sign to put out with my sheep...

This totally has me giggling. Love it.