A couple of months ago, I discussed Miles's issues.

Since that time, we've been meeting once/week with a speech therapist. For probably the first month or so, Miles would have NOTHING to do with this woman. Finally, he began to warm up. But in all honesty, by that point, we were already hearing his language blossom.

Before the surgery, Miles had 2 words. "Yeah." and "No." In the time since then, we've stopped counting. Every time he'd use a new word, I would write it down on a little note card. One of his first new words being "shoes," this boy definitely takes after his father.

Today alone, he has used at least 4 words he's never used before. He's putting sentences and thoughts together. Expressing himself as never before. Just before typing this, he brought me the pink superhero cape belonging to one of his sisters and said, "cape, please." I put it on him, and then he said "thank you, mama. kiss!" And then ran off into the living room to the words, "I Soo-pah-man!" repeated over and over. I think it's safe to say that on the language frontier he's doing quite well.

Now, if you had told me 6 months ago that there would be a time when I would be BEGGING him to stop talking, I wouldn't have believed you. I'd have laughed in your face. And I'd now be eating some crow. In the car, it's a constant barrage of "Mama! I see some trees. I see some cars. Buh-bye house. I see some trees..." Over and over and over. It must be time to teach him the "Quiet Game!" 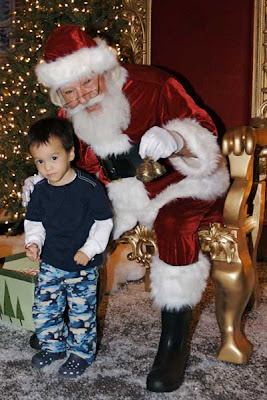 For what it's worth, I did not take this picture. Miles, being introduced to "Mis-muss" aka Santa. He couldn't have cared less about the old man, he just wanted that precious candy cane he's clinging to.
Posted by Alissa at 3:58 PM

So glad to hear he's talking! And I have to admit, I love the talking in the car. So many things come out that don't usually at home.

YAY!! I'm glad you have the opposite problem as before. :D