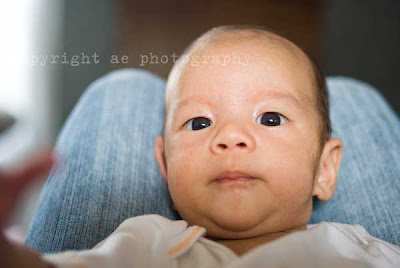 Yesterday, I promised new pictures of the squirt. Here are a couple.

A couple of notes:
He's a terrific baby.
Very alert, very curious about what's going on.
Needs to see the world around him.
When he's awake, he's SO AWAKE.
Doesn't seem to mind his sisters (especially Anna, who feels the need to smother him with her love.)
Loves Miles.
Smiles only for mom!
Sleeps from 8p-4a eats and goes back to sleep till about 7am.
Spits up more than I would like.
Naps best when swaddled.
Best nurser yet.
Hates the swing, bouncy seat, anyplace that isn't my arms.
Loves to have his back patted.
Doesn't really "get" Dad. Can't figure out who this guy who shows up on weekends is. 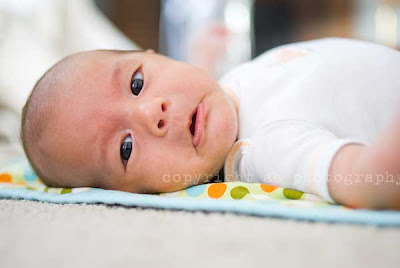 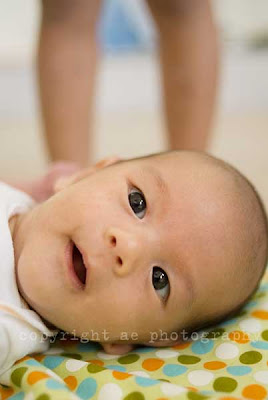 Totally has a male-patterned-baldness thing going on.
Has already had his first taste of Ring Pop (courtesy of Anna).
No problems with pooping, even though my diaper budget is wishing he was a once a weeker.
Still sporting the slate gray/brown eyes.
Cutest Kid EVER.

Yeah I guess you should keep him. He's not Aeris but he's good enough :).

I love the little skinny face and his wobbly, pouty lip. Quick, grab him up and kiss it away!

Sounds like he's a wonderful baby!! You want to send some of those vibes my way, sister? Neither of my kids slept that way until they were a year old. I'd like to give it a whirl this time around. :o)

He's beautiful, and too funny that he's tasted a ring pop! Hahaha

So, SO sweet! Good thing I have one of my own, or I might have to come steal him.

He's so cute. I wish Jake was little still . . .they grow up too fast.