What movie is that from? Anyone remember?

While I don't love everything about my husband's job, they do treat us, as a family well.  A couple times a year, they hire a company called SuperSitters to babysit everyone's kids so they can have a date night. They have a fabulous family Christmas Party with Santa, they do Trick or Treating around the office (6 floors of cubicles!) and they have a wonderful company picnic during the summer.

Except this year. Instead of doing a picnic/carnival like they did last year, they opted instead to pay for everyone to go to Universal Studios. They even paid for parking and a catered lunch. Sounds like a blast, eh?

Well, I'm sure it would if you didn't have 5 children ages 8 and under. We decided to brave it anyway. The kids will enjoy the memories, right? Well, those that are old enough to have memories of it. We're TRYING to be good parents over here.

So, we headed off with our bags packed full of snacks and water. We weren't about to buy any food. No sir.

We arrived at the park and it was already crowded and hot. This is the first picture we took just inside the gates. Kids = Sweaty. Matt = Already Irritable. 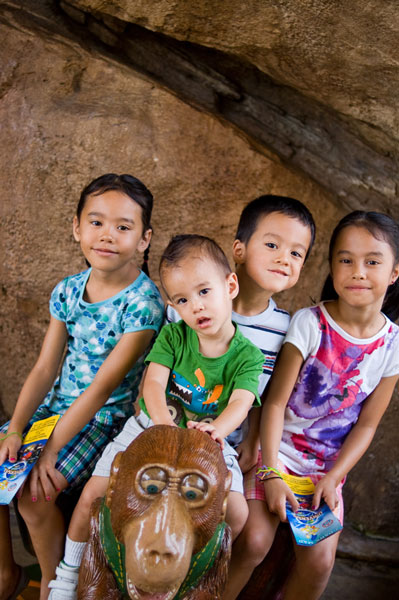 We headed to play in Seussland. And that was fun. I think. Matt was REALLY paranoid about losing one of the kids. And rightly so, Lucas loves to wonder and we know he's just so darned cute that someone's bound to take him, right? Note: Please only take him if you promise to keep him. No Returns Allowed. I'm serious. 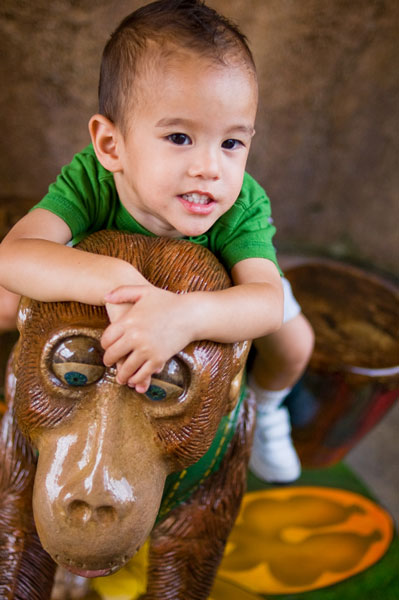 We rode the (NO WAIT) Carousel and Matt and the older three kids stood in line for 30ish minutes to ride some other ride in the Seuss area.  Then we marched over past the new Harry Potter Area to the Jurassic Park play area. It involved a lot of shade. Wahoo!

Then we headed back OUT OF THE PARK (read: 1 mile) to eat our catered lunch at Universal CityWalk. Lunch was all the chaos of eating out with 5 kids, one of whom pooped all over me. Can you tell this is headed downward, and quickly? Do I look amused? 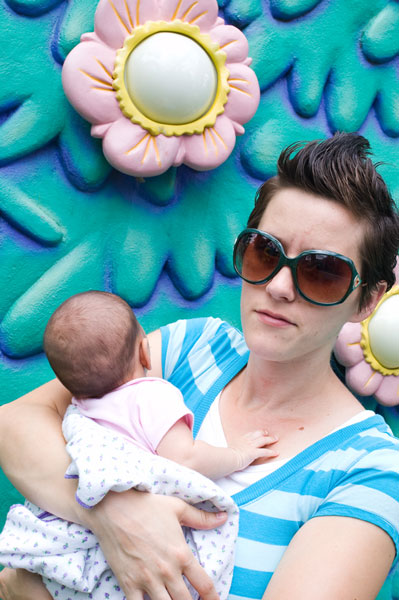 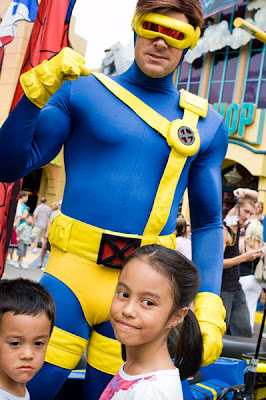 At that point, I was totally ready to LEAVE. But I was trying to be a good sport. My feet were tired, Libby was tired but wouldn't sleep and it was HOT. We marched back the mile into the park and ran into their SuperHero Parade. Those dudes were HUGE. Cyclops was probably 6'9" or taller and Captain America was quite the hunk. Lucas was terrified. Hence, his absence. He was gripping my side in utter terror. Poor kid. He didn't get the memo about them being the good guys. 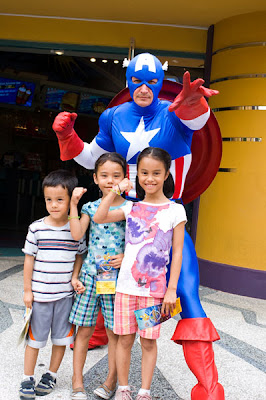 We made our way to what would prove to be our final destination... a splash pad. A tiny one. Our kids couldn't have cared less how big it was. They were in heaven. After they'd been thoroughly soaked, we started to head for the gate. I could sense our freedom. It was within my grasp. As we neared the entrance, Matt said to me, "Let's just take the kids over to the Seuss play area one more time." 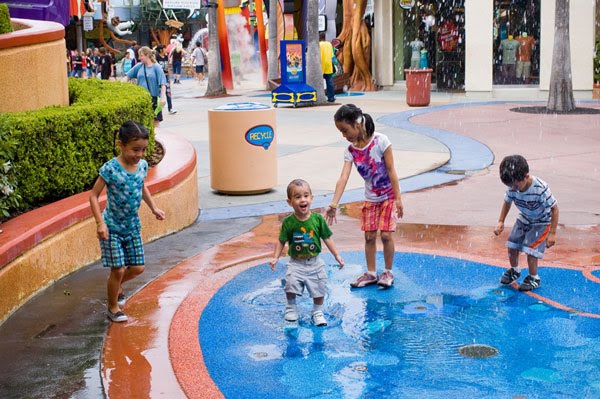 Folks, I started to cry. I couldn't walk anymore... I was done. In desperation, I turned to my right where I noticed an ice cream shop and quickly said, "Kids, do you want ice cream, or do you want to go play?" It was a risky venture but I won. We, in an intensely cheap move, shared a single ice cream cone.

And left. Phew.
So yes, we went to Universal Studios where my children rode exactly two rides, ate one $4 ice cream cone, and walked ALL OVER. I couldn't be more glad that it was FREE.
Posted by Alissa at 8:17 PM

You are the funniest girl on the freakin' planet. I laughed the whole way through this post. No one could pay me to go to Universal with 5 kids. :) You are the coolest MOM. Hey kids, your Mom is cool.

That pic of you and Libby is priceless. I feel your pain in that picture. You are one brave, brave soul to attempt that. Too funny!

oh my...you guys are so brave! I knew there was a reason we avoided those touristy places like the plague :) they look like they had a blast though.

btw - i think that's from bedtime stories. just saw that the other day...very cute.

i know. we always try to do fun things as a family and then it turns out disastrous. and we only have two kids. two!

but at least you went!

And now you know why we never went anywhere like that when you were little. Think about doing it with NINE kids. I always knew I would loose Matthew. Remember the trip to Niagara Falls and Canada? I made Matt (5) and Jenny (3) where those harnesses. That's the only reason Matt is still with us today. I know where you're coming from kiddo. Love ya.

dont you hate it when free isnt even worth it?
id rather have free babysitting than imposed family time.

That sounds not unlike our trip to Disney last year...which, sadly, was the opposite of free.